As a Group-1 winning son of exceptional Champion sire Redoute’s Choice, Yulong Stud’s Alabama Express represents the next generation of one of the most successful stallions of all time in the Southern Hemisphere.

Redoute’s Choice was owned and bred by Sri Lankan businessman Muzzafar Yaseen, and after sitting down with trainer Rick Hore-Lacy at lunch at Flemington one day, he asked if he’d like to train the colt. Seeing how well-bred the colt was, Rick jumped at the opportunity and would later declare he was the best horse he had ever trained. The Redoute’s in Redoute’s Choice came from the owner’s clothing distribution company in Singapore.

“Ive been shouting from the rooftops how good this colt is. He could be the best horse I’ve had.” Rick Hore-Lacy.

With a racing career that lasted just over 12 months, Redoute’s Choice had 10 starts for 5 wins, four of which were at Group 1 level, including the G1 Blue Diamond Stakes. He was only ever out of the placings on two occasions.

As a 3YO he made his return strongly, winning the G1 Manikato Stakes (1200m) at Moonee Valley where he became a Group 1 winner at weight-for-age at just his third start. After two Group placings, he won his famous battle in the G1 Caulfield Guineas against Testa Rossa while other future top stallion Commands came in third.

Redoute’s Choice then returned in the autumn, adding a fourth G1 success, defeating Miss Pennymoney and Intergraze in the G1 CF ORR Stakes.

Ending his career on a high, he was retired to stand at stud at Arrowfield in 2000. His stallion career only proved successful from early years, when in 2004 he was crowned Champion first season sire in Australia, followed by Champion sire in 2006, the first of three Australian General Sire titles.

Redoute’s Choice’s influence reaches across the globe. He is the sire of 1171 individual winners worldwide, with a 77.5% success rate of winners to runners; including 11.8% stakes winners to runners, 7.7% Group winners to runners and has produced an amazing 39 Group 1 winners, accumulating over $179 million in total prizemoney. Some of his sons that now stand at stud to name a few include; four-time General Sire Premiership winner Snitzel, this year’s runner-up Not A Single Doubt, The Autumn Sun, Alabama Express, and the late Golden Slipper winner Stratum.

When looking at Alabama Express, there are uncanny similarities in looks he inherits from his father. Both beautiful-bodied horses, with strong shoulders & hind quarters, and stunning head with a star in the middle.

They also share a remarkable racing achievement. At the second start of their 3YO Autumn Carnival campaigns they both won the G1 weight-for-age CF Orr Stakes, beating older horses in doing so. Alabama Express finished in 1:22.07s (beating multiple Group 1 winner Fierce Impact) and Redoute’s Choice ran home in 1:24. The wins became not only the last career victories for both horses, but also their second-last start prior to retirement.

Fairgray believes that not only do father and son have physical qualities in common, but also are both known for their kind temperaments.

“I was lucky enough to work at Arrowfield for several years with Redoute’s Choice. Alabama Express has so many characteristics of his father. You get glimpses of his head and you think, ‘My god that’s your father through and through.’” Sam Fairgray

Sharing the same Champion sire and broodmare sire as Alabama Express, Beneteau retired to Arrowfield Stud in 2011 and stood for just two years, before his tragic death in January 2013 after serving almost 180 mares during his two seasons at stud.

Beneteau left 131 named foals, of which 107 started, and 78 won. Twenty-two of his foals were stakes performers, 10 were stakes winners and 6 of those have been successful at Group level, including Group 1 winners Prompt Response (2020 G1 Tatt’s Tiara) and Lasqueti Spirit (2016 G1 VRC Oaks).

Beneteau was on track to be the next elite-level sire son of Redoute’s Choice, proving to produce extremely high-quality results from his matings in his first two crops, despite covering mares with a very low CI rating.

As one of Australia’s greatest ever stallions the strength and influence that will be felt for generations to come, Redoute’s Choice’s legacy continues through his sons and with their similar traits, impeccable qualities and total class, high expectations are held for his son standing at Yulong Stud, Alabama Express.

As one of Australia’s greatest ever stallions, the strength and influence of Redoute’s Choice will be felt for generations to come. His legacy continues through his sons and with their similar traits, impeccable qualities and total class, high expectations are held for his son standing at Yulong Stud, Alabama Express. 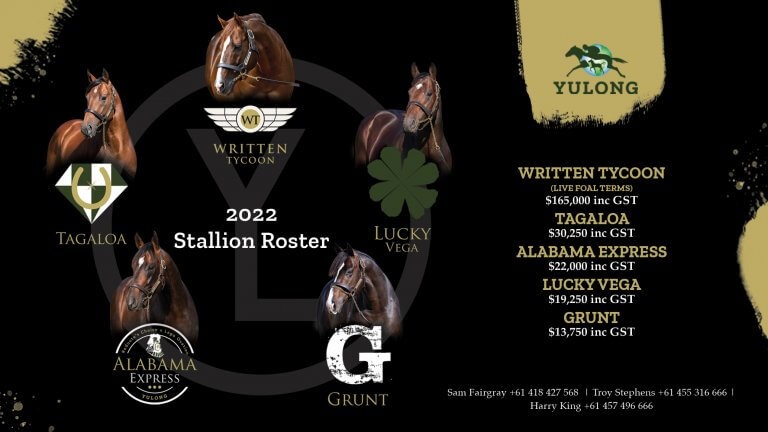