Yulong have added another Group 1 winner to their burgeoning stallion roster this week, purchasing G1 Blue Diamond Stakes winner Tagaloa (Lord Kanaloa {JPN}) who will continue to race for the Busuttin Racing stable.

“Tagaloa epitomises what we’re looking for in a modern Australian stallion – he’s good looking, a Group 1 Blue Diamond winner at two and a complete outcross,” said Sam Fairgray, Yulong’s Chief Operating Officer. “We believe he’ll be even better at three.”

“Lord Kanaloa is Japan’s most exciting emerging sire and is poised to take over the mantle from Deep Impact. It’s a privilege to stand a son of such a dominant young sire and brilliant sprinter. 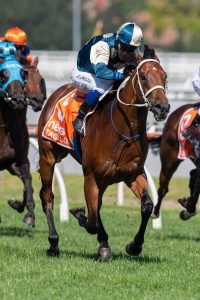 “It has been a milestone day for Yulong, with Hungry Heart winning the Group 2 Sweet Embrace Stakes at Randwick, becoming our first Group winner from our first Magic Millions draft and now securing our third stallion for the Yulong roster.”

Lord Kanaloa topped the first season standings with 32 winners, some 12 clear of his nearest rival, with his debut crop including six-time Group 1 winner, Horse of the Year and world’s highest rated 3-year-old, Almond Eye. Those results were strong enough to make Lord Kanaloa the second-leading sire of 2-year-olds among the general sire population, with only the incomparable Deep Impact proving superior.

Trent Busuttin of Busuttin Racing was effusive in his endorsement on keeping a colt of this quality in the local breeding population.

“Yulong purchasing Tagaloa is a huge tick of approval for the Victorian breeding industry,” he said. “These types normally end up in the Hunter Valley.”

“To have a horse like him, a stunning physical and Blue Diamond winner with an international outcross pedigree, stay in Victoria is a massive vote of confidence. Yulong are leading the pack, setting the standard of new development in the Victorian industry.”

Making an early impression like his sire, Tagaloa won his only trial before stepping out to place third in the Group 3 Maribymong Plate on debut. He then backed up with a win in the Strath Haven Preston 2YO Plate.

Following a short spell, Tagaloa started fresh up in the Group 3 Blue Diamond Prelude to place fourth before landing his biggest title to date in the Group 1 Blue Diamond Stakes, beating home Hanseatic, Away Game and Letzbeglam.

Arrowfield Stud offered Tagaloa as a yearling at the Magic Millions Gold Coast Sale with Busuttin Racing securing the standout colt for $300,000. Trent Busuttin had seen Lord Kanaloa race in Hong Kong and was drawn to his brilliant speed, which naturally attracted him to his yearlings.

“Tagaloa was an outstanding yearling and always looked like he’d grow into a lovely horse,” said Busuttin.

“We were impressed by his temperament as a yearling, this came through as an early 2-year-old and makes him a beautiful horse to deal with now.

“On type he’s a big powerful, striking colt. He’s got a lovely head, athletic physique and a great frame. To be honest, what he’s doing now at two is a bonus and he been done on raw, natural talent – he’s going to make a very exciting 3-year-old.”

The announcement of Tagaloa, in a deal co-ordinated by Ozzie Kheir and Matt Becker, comes off the back of purchasing a significant share in Group 1 CF Orr Stakes winner Alabama Express (Redoute’s Choice) earlier in the week, who will be joining Grunt (NZ) (O’Reilly {NZ}) on its roster.